Risks in and around Bodfish

The risks and dangers in the areas surrounding Bodfish, California, abound. The following are just some of them. Note also that of course there are risks in everything in life, and the risks set out below are not uncommon, and can exist in many places. If one uses good judgement, the risks surrounding Bodfish aren’t unreasonable, and they can be more than offset by the beauty and uniqueness of the area. Risks include, but are not limited to:

1. River Risk (the lower and upper Kern):
Although the river often seems calm, inviting and terrific for swimming/floating/rubber boating, the river has always been a killer to those who don’t take it seriously. Some of the risks are hidden rocks and debris, and fast currents beneath the surface. Since 1968, around 7 people a year have drowned in the river. That sounds like a lot and it can be tragic if one of those lost is a loved one, but it’s not that many when you consider that tens of thousands of people swim safely in the river each year. Children near or in the river should be carefully supervised at all times; adults and others that aren’t good swimmers should be equally careful. 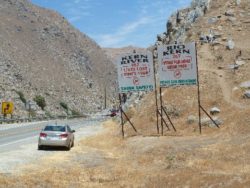 Rafting on the river can be great fun, anxiety producing, and dangerous as the lower Kern has Class III and lV (and some say V) rapids, depending on the water flow, but, if you go with a reputable rafting company, and if you are in good health and are using proper safety equipment, including a helmet and life jacket, and you exercise prudence, you should have a scenic and exciting time.

2. Slower medical care – Because medical care may not be nearby (the nearest hospital, Kern Valley, is about 6 to 7 miles away from Bodfish), and because people in a wilderness environment can wander off alone and do new and more strenuous things than they might do at home, the risks of a heart attack or other serious medical problems increase, and the slower medical assistance found in much of this area could cause serious medical complications or even death.

3. Sunburn/heat stroke – Particularly during the summer, one can become quickly toasted. Wear a hat and light long-sleeve clothes in direct sunlight and don’t spare the sunblock.

4. Rattlesnakes – Rattlesnakes are relatively common in the area. A Los Angeles Times article (7/29/93) said 200 Californians a year are bitten by rattlesnakes and about 2% of those (Four people a year) die from their bite. Bites require immediate emergency care, probably with anti-venom.

5. Red ant bites – Little red ants are common and their bite can be painful and leave a stinging sensation that can last for hours.

6. Meat bees and yellow jackets – These little guys normally leave people alone but if accidentally stepped on or if bothered, or if they are fighting for your food, they can inflict a painful and throbbing sting that can continue for hours. Those who are allergic to such bites should take extra caution.

7. Kids’ skinned knees/body parts – Kids are kids and tend to run amok in new areas and in different environments than they are used to. They therefore tend to slip and fall more than in an urban environment or in places they are familiar with.

8. Flora (plant) risks – Poison oak, poison ivy and nettles aren’t human friendly and can cause itching, sores and other adverse medical conditions. Know and avoid them.

9. Cows: – A Bodfish local man, circa 2000, was tending his first garden of tomatoes, and just before the tomatoes were ripe, a small heard of cattle (8 or 9 head), found his garden and ate the tomatoes and some of the vines and in the process trampled his garden.

– A woman Bodfish local in 2012 T-boned a cow that suddenly appeared on the road. The crash was low speed (about 20 mph). The cow was moved sideways a few inches and walked off, but the 2005 Toyota truck was totaled. The insurance company, Met Life, paid the loss.

– Caltrans has put up a road sign near the confluence of highway 178 and the old Kern River Road, that shows a cow falling from the steep mountains on one side of the road through the canyon. Circa 2009, three cows, at different times during the rainy season, fell off the mountain. Two of the cows died in the fall. The third one was hit by a car but survived. 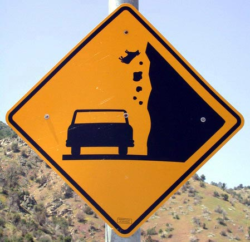 10. Horses – There are many horses in the area and many, if not most, are gentle. However they often weigh over 1,000 pounds, are muscular and not bright by human standards. They sometimes panic and trip just like people and when they panic or trip, one can be thrown, trampled or slammed into something. As many well publicized horse accidents have shown, serious injuries, paralysis and death can be the result of accidents with horses. Also, when petting or grooming a horse, they can move around and accidentally step on your foot, which not only hurts, but can break bones. Although somewhat unpredictable, horses can also be fun and exciting, and should only be approached with caution and good sense, and only ridden by those capable.

12. Falling trees and branches – There are many trees in the area and many are not trimmed or cut as they might be in the city. There are also cottonwood trees in some places along the river’s edge and large and small branches of cottonwoods are known to break off without warning.

13. Fires – The area is dry much of the year and one accidental or thoughtless mistake could cause a fire and irreparable damage. Any fire should be started only when and where it is legal to have one, and all fire laws and codes should always be followed